As I’ve said before, being an RN has given me great advantages in understanding biblical truths. God regularly uses medical metaphors in revealing biblical insights or secrets that others may miss. This end time metaphor of “birth pangs” which marks the “beginning of sorrows” is no different (see Matthew 24:8). This metaphor Christ uses is a brilliant one. It reveals truths about the end times that we cannot afford to dismiss or misunderstand. There is great wealth here. His example of birth pangs was not something he pulled out of thin air for the sake of the moment. It was very intentional. Birth pangs describes the peril and progression of the end, which is extraordinarily  accurate in its application. With all due respect, unless you’ve had a child, experienced natural childbirth, or understand birth pangs from a medical perspective, some of the intricacies here can be overlooked.

If you’re wondering about this metaphor of birth pangs, I’d like to bring some clarity to you, and reveal the prophetic progression we are currently seeing in the world. It’s everywhere and it’s inescapable. We are now living in a global economy unlike ever before. You may ask, “Are the birth pangs truly upon us?” In response to that question, I would answer a resounding “YES!” And although some would argue that the events we see today have been repeated in the past, I’m going to uncover the answer as to why the current events we see all around give credence to this point, because the secret to the birth pang metaphor is not merely revealed in the events themselves. It’s revealed in the process.

The conception of the Church began with the seed of Christ which was planted more than two thousand years ago. He was the kernel of wheat that fell into the ground and died, producing a great harvest which has yet to be reaped. We are told that He is the Incorruptible Seed, the Word of God, which has produced spiritual offspring all over the world (see 1 Peter 1:23). So we must understand that there is something about to be born, which has been conceived in the world and is about to be delivered into heaven. With that being said, we are told that the world groans for the revealing of the sons of God (see Romans 8:18-25), which is that moment when we will experience the resurrection, receive our glorified bodies, and begin to reign with the LORD. That transition process initially begins with birth pangs, marking the season of time when the delivery (deliverance) is drawing nigh.

For I reckon that the sufferings of this present time are not worthy to be compared with the glory which shall be revealed in us. For the earnest expectation of the creature waiteth for the manifestation of the sons of God. For the creature was made subject to vanity, not willingly, but by reason of him who hath subjected the same in hope. Because the creature itself also shall be delivered from the bondage of corruption into the glorious liberty of the children of God. For we know that the whole creation groaneth and travaileth in pain together until now. And not only they, but ourselves also, which have the firstfruits of the Spirit, even we ourselves groan within ourselves, waiting for the adoption, to wit, the redemption of our body. For we are saved by hope: but hope that is seen is not hope: for what a man seeth, why doth he yet hope for? But if we hope for that we see not, then do we with patience wait for it,” (Romans 8:18-25, KJV).

Since the conception of the Church, the Apostles have urged the Body of Christ to prepare and be ready for the LORD’s coming. They recognized and made reference to their present day as being the last days. In Acts chapter 2 we see Peter declaring the prophecy of Joel as having come to pass with the outpouring of the Holy Spirit on Shavuot (Pentecost). Therefore, we need to understand that what we consider to be the end times have been progressive since that outpouring. The conception of the Church marks the beginning of what scholars refer to as the Age of Grace, wherein the Gentiles are gathered together from the ends of the earth. The end of the age can be recognized by the fullness of the Gentiles, the salvation of Israel (see Romans 9-11), and by other world events such as persecution, wars, and a great apostasy among believers (see Matthew 24:1-13).  When Jesus Christ gave the discourse regarding end times in Matthew 24, he follows a precise chronological order, wherein the “beginning of sorrows” is mentioned in verse 8:

Take heed that no man deceive you. For many shall come in my name, saying, I am Christ; and shall deceive many. And ye shall hear of wars and rumours of wars: see that ye be not troubled: for all these things must come to pass, but the end is not yet. For nation shall rise against nation, and kingdom against kingdom: and there shall be famines, and pestilences, and earthquakes, in divers places. All these are the beginning of sorrows,” (Matthew 24:4-8, KJV, emphasis mine).

The word “sorrows” is odin pronounced (o-deen), which according to Thayer means, “the pain of childbirth, travail pain, birth pangs, and intolerable anguish, in reference to the dire calamities preceding the advent of the Messiah”. According to Strong’s it means, “A pang or throe, especially of childbirth: pain, sorrow, travail.”

“Knowing this first, that there shall come in the last days scoffers, walking after their own lusts, and saying, Where is the promise of his coming? for since the fathers fell asleep, all things continue as they were from the beginning of the creation,” (2 Peter 3:3-4, KJV).

Many would argue that since the beginning of time all of these calamities have occurred. That statement in itself is true. However, what many do not take into account is that their frequency and intensity are accelerating.

Talk to any mother who has experienced the progression of labor and natural childbirth. The first pang of birth can be subtle and almost imperceptible. Many women have mistaken the identity of birth pangs for intestinal gas, the need to have a bowel movement, back pain, and other normal sensations. Sometimes the initial pang is nothing more than a twinge or a sense of pressure, often in areas that don’t otherwise relate to childbirth.

From the time of the initial pang to the delivery of the child, hours and even days can pass. During this time the birth pangs come at measured intervals which are predictable and increasing. However slow the progression, birth pangs will always increase in frequency and intensity as the delivery draws nigh.

And when these things begin to come to pass, then look up, and lift up your heads; for your redemption draweth nigh,” (Luke 21:28, KJV).

That word “redemption” is apolutrosis which also means “deliverance” or “ransom”. There are other qualities to birth pangs such as the character of the pain, the duration, and the location. However, for the purpose of this post, we will focus on their frequency and intensity.

The Beginning of Sorrows

The initial birth pang, if recognized appropriately, can have incredibly long intervals — as far apart as 30 minutes. During the second phase of labor just prior to the birth, birth pangs can be as close as one minute apart. It is during this time that they are the most severe.

In keeping with the birth pang metaphor, when referencing the calamities spoken of in scripture some of the greatest wars and natural disasters we’ve seen have been centuries apart. However, since Israel became a nation in 1948, we’ve seen a rapid and progressive increase both in global natural disasters and in war(s) all over the world. Just in the last twenty years we’ve broken records with tsunamis and tornadoes alone, just to name a few. Earthquakes are occurring with greater frequency also — as well as intensity. Nations are indeed rising up against nation, and kingdom against kingdom.

The calamities we are seeing today, both in war and natural disaster, are occurring at a frequency never before seen.

Intensity speaks to the character of the pain and its duration. The pains that are more intense often last longer as delivery progresses. Their character is different as well. They are often sharper and cover a broader area. Therefore, all these factors are compounding, making the intensity that much greater. When the intensity is at its peak, transition occurs, wherein the mother is fully dilated, the baby enters the birth canal, and the birthing process begins. Both mother and baby work together to bring the delivery to pass. If the baby is positioned correctly, each contraction signals the infant to push with its feet, while the mother is able to bear down. Transition is the most painful time during the birth process, yet it is the shortest span of time comparatively, if the birth goes smoothly.

When we consider the Church and the persecution upon us, we can all agree intensity is steadily rising. It’s sharper (more brutal), and it’s broad (meaning it takes many forms and is coming from many directions). The persecution Christians are facing today is global and taking many forms within society as a whole: politically, academically, socially, and of course physically. To be a Christian today is not popular, nor is it welcomed among the masses.

The intensity is every increasing with regard to the character in which it presents itself, and the duration of time.

I want to encourage every believer to continue in their faith boldly and without apology. The persecution and world events surrounding Christ’s return will continue to accelerate in frequency and intensity as the world groans for our deliverance.

If you are anticipating things to improve or get better, you will be disappointed. Do not set yourself up for deception. Christ has made it absolutely clear that things are going to increase, waxing worse and worse, culminating in the tribulation:

For then shall be great tribulation, such as was not since the beginning of the world to this time, no, nor ever shall be. And except those days should be shortened, there should no flesh be saved: but for the elect’s sake those days shall be shortened,” (Matthew 24:21-22, KJV, emphasis mine).

Be encouraged and prepare to stand strong so you can endure unto the end. Your deliverance draws nigh. 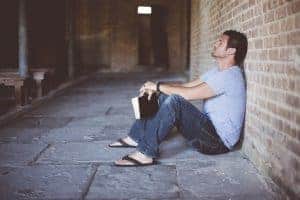 You’ve heard God’s voice. But they say God no longer[...]