The Spiritual Significance of the Pearl

Pearls are considered the most rare and valuable of all precious gemstones in the world, and not without good reason. They are the only precious gem created by a living creature. Therefore, a natural pearl is extraordinarily costly, especially if it is of superior lustre, pure white, perfectly round, without defect, and of any considerable size. Pearls begin with what is termed a “core”, which is a particle of sand, shell or other debris which lodges within the oyster. It is around this core that hundreds of thousands of layers of nacre are carefully laid. Nacre is what gives the pearl its glorious luminescence or lustre, which is layered over many years by the oyster’s secretions in an attempt to alleviate pain. The pearl’s ability to reflect light is unlike any other gemstone, being that it’s entirely opaque. The iridescent mirror-like quality by which it reflects light goes very deep within its layers, giving it a mesmerizing brilliance. The deeper the nacre, the greater the lustre. The lustre of a pearl can only be properly evaluated by the earliest morning light, which actually begins at the edge of the northern horizon. It is the purest light of the day, producing the most even wavelengths.

Natural pearls of such quality are extraordinarily rare. Nobles, royals and dignitaries historically wore the pearl as a symbol of their power and wealth by roping their necks and adorning their crowns. Brides wore them as a symbol of their purity by braiding them in their hair, stringing their necks, and decorating their ears. They even embroidered them within their gowns. However, the oysters that produce these gems sacrifice their lives for those who would harvest their wondrous creation. The average pearl, being 7 mm, requires approximately seven years to create when cultured, even more when in the wild. After years of harvesting what took so many years to produce, the pearl was feared to have nearly become extinct. Thus, the fine art of the cultured pearl began in the mid-nineteenth century, continuing to this day.

The natural white pearl still remains the most rare of all precious gemstones in the world — and therefore, also the most costly. A cultured pearl, which is most commonly found in the market today, is a close rival, and only when produced with the utmost integrity in near-perfect conditions. In the new world of cultured pearls, quality can only be properly evaluated via x-ray, where the core is revealed and its nacre’s concentric depth is measured. With that said, not all are the same, and therefore appearances can be deceiving.  Natural pearls indeed have a fascinating and mesmerizing effect upon their observers which cannot be explained to those who have never witnessed their glory. Their display of light is absolutely incomparable to any other gemstone. To behold a natural pearl is to become rapt within its luminescence, which few men have ever had the pleasure of witnessing, much less owning.

Pearls, according to scripture, were considered unclean by the Law, having come from the oyster, a mollusc shellfish, which buries itself deep within the mire of the ocean floor. A Jewish man would have never given his wife a pearl. And to do so would have been to break the Law, making her unclean, and bringing shame or insult. This historical backdrop is what lends wealth to the pearl’s spiritual significance.

In stark contrast to the Law, Christ Jesus uses the pearl in a parable whereby He attributes enormous value to the lost and describes the sacrificial cost of redeeming His Church. Pearls are also found in Revelation, being that particular gemstone chosen by God from which the twelve gates of the New Jerusalem are singularly crafted. How interesting that God would choose the pearl as the portal of heaven, being an unclean thing, through which He declares nothing unclean or unholy should ever gain an entrance. Yet it is through these very gates that His redeemed will enter His kingdom to dwell with Him for all eternity. In this way, God has made the pearl a marvelous and extraordinary symbol of redemption.

Throughout our website you will see pearls depicted on numerous occasions, and within our trademark, all of them promoting the same core message of purity to which Christ calls His elect bride, and the lavish redemption that cost our LORD absolutely everything. Christ, who has carefully searched us out, having drawn us out of such deep darkness and the mire of this world, and having removed us from all that He would consider unclean — has fully redeemed us, bringing us into the pure light of His Son, making us that very rare and precious gem who would reflect His light from deep within our core to bear the image of His glory.

The pearl is perhaps the finest example of the pain and sacrifice required to harvest something of the rarest beauty and purity known to man. The manner in which it is formed and harvested gives it a sacred quality no other gem can claim. It is therefore no accident that our LORD chose the pearl to represent the value of His Church, the extravagance of His sacrifice by which He fully redeemed us, and finally the passage through which we will enter His kingdom to dwell with Him for all eternity. 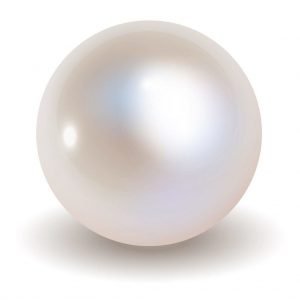